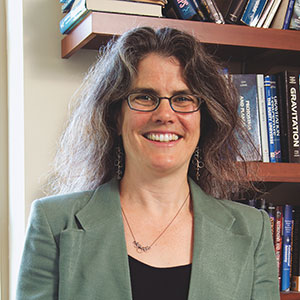 Professor Andrea M. Ghez:
The Monster at the Heart of our Galaxy

Learn about new developments in the study of supermassvie black holes. Through the capture and analysis of twenty years of high-resolution imaging, the UCLA Galactic Center Group has moved the case for a supermassive black hole at the center of our galaxy from a possibility to a certainty. This was made possible with the first measurements of stellar orbits around a galactic nucleus. Further advances in state-of-the-art of high-resolution imaging technology on the world’s largest telescopes have greatly expanded the power of using stellar orbits to study black holes. Recent observations have revealed an environment around the black hole that is quite unexpected (young stars where there should be none; a lack of old stars where there should be many; and a puzzling new class of objects). Continued measurements of the motions of stars have solved many of the puzzles posed by these perplexing populations of stars. This work is providing insight into how black holes grow and the role that they play in regulating the growth of their host galaxies. Future measurements of stellar orbits at the Galactic Center hold the promise of improving our understanding of gravity through tests of Einstein Theory of General Relativity in an unexplored regime.

Professor Andrea M. Ghez is the Lauren B. Leichtman & Arthur E. Levine Chair in Astrophysics and the Founder and Director of the UCLA Galactic Center Group. Professor Ghez earned her B.S. in Physics from MIT in 1987 and her Ph.D. from Caltech in 1992, and has been on the faculty in the Department of Physics and Astronomy at UCLA since 1994. Professor Ghez has actively disseminated her work to a wide variety of audiences through more than 100 refereed papers and 200 invited talks, as well as features in textbooks, documentaries, and science exhibits. She has received numerous honors and awards including being the first woman to receive the Crafoord Prize, receiving the MacArthur Fellowship, and being elected to the National Academy of Sciences and the American Academy of Arts & Sciences. Professor Ghez has also served on committees for NASA, the National Science Foundation, and the National Academies of Science, among others.

Professor Ghez is a world-leading expert in observational astrophysics and has used the Keck telescopes to suggest the existence of a supermassive black hole at the center of our galaxy, with a mass 4 million times that of our sun. She is currently using and developing high spatial resolution imaging techniques to study star formation and investigate the proposed massive black hole at the center of our Galaxy. Using Interferometric techniques and Adaptive Optics, Professor Ghez has been able to produce diffraction-limited images of astronomical objects that had up to the development of Adaptive Optics been impossible to observe with ground based telescopes.